Costco the land of giant carts, where people don't understand the link between non-organic produce and their "need" for bottled water....

Anyway, I found a wonderfully helpful list here with few exceptions (ahem, GoGo Apple Squeezes, which make me nearly lose faith in humanity). While it is a lovely list, it is either out of date or we get very special Costco items in California. ;) Here are a few exciting items I noticed:

Hemp Hearts 28 oz, $14.59
I've been wanting to try them  in these as an alternative to ShotBloks. 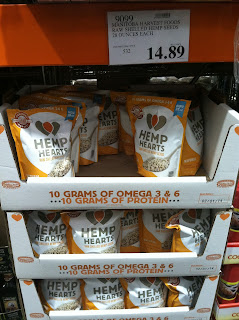 WildRoots Ancient Grain Pancake Mix 3.3 lbs, $8.59 (Gluten-free)
Maybe not healthy, as it is a highly processed item, but healthier than the death mix next to it. 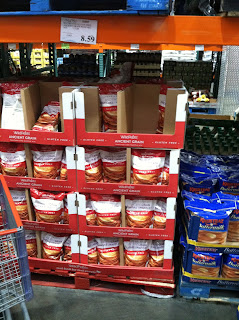 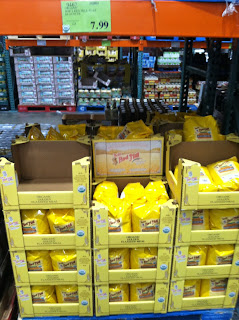 Nature's Path Organic Qi'a Superfood 22.88 oz, $14.59
Considering this is no more than chia, hemp, and buckwheat the price is hilariously good marketing.  I could buy this in bulk at Whole Paycheck and blend it myself for less. Sounds yummy though... 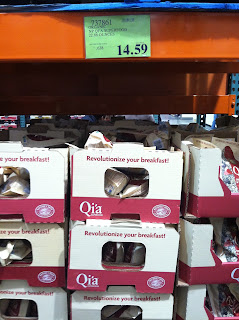 Other things I noticed:
- No chia seeds but they do have them occasionally. I searched for them so long; that's what gave me the chance to snap pictures.
- Larabars (less than a dollar each I think). If I were doing any traveling soon I would have bought them.
- I didn't see any gluten-free breads but they carried Bob's Almond flour and a Bob's gluten-free blend flour.
- Yes, they also have quinoa and nuts but that was covered in the reference list above :)
- No bean-based protein powder.

I don't buy produce at Costco because it's cheaper elsewhere since I live in CA. I also don't buy "snack" foods so I didn't check for healthier options there. (I lied - I bought a jar of sun-dried tomatoes for snacks. They're so sweet!) So that's why I focused on grains/seeds as they are, in addition to nuts, the biggest areas of cost savings for vegan/vegetarian shoppers at Costco! I'm curious though if people in say, Michigan, would be able to find gluten-free options and hemp hearts in their Costco stores. If I see anyone at Costco wearing a manager tag next time I'm sure I won't be able to resist asking.